With "Four Free" anything can happen. These musicians are so completely at home in the world of spontaneity, that they may shift gears and change roads without warning and end up in another musical universe before the piece finds it's end. The wild electric sounds of Adrien Dennefeld's guitar, Chris Jarrett's expressive compositions and piano improvisations, Jérôme Fohrer's playfully jazzy bass, and the inimitable rhythms of Pascal Gully make for a charged and powerful music, with a truly unique sound and lot's of humor. 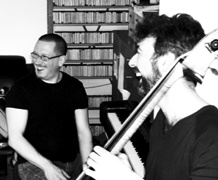 Adrien Dennefeld (electric guitar, electronics)
Adrien Dennefeld was born in 1983 in Strasbourg. He started music at the age of seven by learning the cello. After nine years of studying this instrument, he began playing guitar with his favorite records and so learned the rudiments of improvisation. From pop music to jazz, from hard rock to contemporary music, Adrien Dennefeld takes what he needs from these styles to express himself freely. He has also been deeply involved in dozens of projects involving the other arts, and often composes music for dance, theater and film. He has played in numerous festivals in Europe with various ensembles; at the same time launching new projects - in particular with African musicians. In Four Free, Adrien is pursuing his search for new sounds by subtely mixing his wild electric guitar into electronic treatments.

Jérôme Fohrer (bass)
Jérôme Fohrer was born in Eastern France in the region called Sundgau. He began his career with the electric bass in rock formations. His growing interest in jazz was a major cause for his move to Strassbourg, where he began his studies of the double bass. Never at home in stylistic straight-jackets, he found himself paving his way as a continuo-bassist, an improviser and orchestra-member playing contemporary and baroque music, and as a jazz musician. His flexibility and security of style (and his sense of humor) have allowed him to take part in dozens of different projects in which inspiring musicians were active. His creativity has lead him to work with groups well-known for their original compositions and improvisations rather than those repeating a known repertoire. 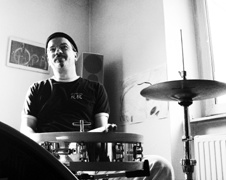 Pascal Gully (drums)
Pascal Gully was born in 1969 in Strasburg, France and began teaching himself the drums at the age of twelve. His curiosity for different kinds of artistic expression led him to apply his precise sense of rhythm and his musicality to dozens of musical (rock, jazz, ethnic, improvised and contemporary) and pluriartistic projects. Since then he has worked with dancers, choreographers, theater-directors and film-makers. He has performed at numerous festivals and concerts with dozens of reknowned artists from Europe, Africa and the Americas. His inimitable rhythms and subtle musicianship make him an integral part of the formation "Four Free" in which he plays a creative role equal to that of his colleagues.

Chris Jarrett (piano)
Chris Jarrett is a composer who plays the piano. His music has taken him to all parts of the world and given him the chance to work with great musicians, big and small. Born in 1956 in the USA, he studied music there (Oberlin Conservatory) for a time, but left the sterility of college soon (penniless) to take jobs in the most differing kinds of hard labor. After his immigration "back" to Europe (part of his family are of Slovenian origin), he found the time to rebuild his creative interests and began his career again in 1985. Since then, he has set his pen and his fingers to music for the theater, ballet, opera, "oriental-jazz", film-music, piano and chamber music, etc. In the "hardcore-chamber ensemble" Four Free, which was founded in 2005, Chris Jarrett is playing his musical wild card and opening up the more spontaneous and even jocular side of his creative world.