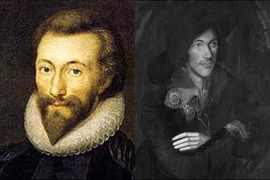 On the surface, the opera "John Donne" is about the life of a genius (John Donne, English poet, 1572-1631) in a time of great societal changes. Donne's poetry shows a modernism that strongly impressed writers like T. S. Eliot and Ernest Hemingway. The rhythms of many of his works, too, are surprisingly well-suited for modern musical adaptation. Certainly one of the points of this composition is the revealing of Donne's poetic intentions through showing historical contexts, but also exhibiting the historical situation of the time through Donne's eyes. In this sense, "John Donne" is indeed an historical opera. 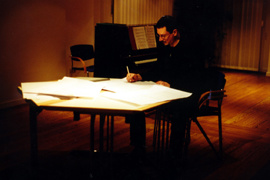 "John Donne" has three acts and will last about 2 1/2 hours.
Act one sees Donne as he grew up as son of a traditional Catholic family in Anglican England. He was raised in highly subversive surroundings, and he attempts to stand up against the pressure put upon him by them. The death of his brother in prison is the decisive event which leads to his determination to take the path of an Elisabethan gentleman.
The second act deals with his wild years as a student and as secretary to Thomas Egerton. Apparently, his concern with religious ideologies is successfully tilted. One love affair follows another and his friends crown him "king of the orgies." His subversive lifestyle has basically remained - only having transformed itself into new forms. In his erotic poetry, he provokes his environment with the astounding realism of his language. The traditional flowery lyricism of his times is aggressively undermined and even twisted. Finally, he falls in love with Ann More, whom he secretly marries. Again, he is discarded from "good society" and even thrown into prison. His way up has apparently come to an end.
Act three: Donne is in his most difficult crisis. Despite a happy marriage, he must experience poverty, the life of an outcast, the death of many of his children, and inner desperation. After the death of his wife and a long inner struggle, he begins to turn to Anglicanism, and finally accepts the offer of King James 1 to become Dean of St. Paul's Cathedral in London - now an Anglican preacher. His sermons remain on an incredibly high literary level and continue to provoke and warn society, all classes included. He sets his talents to work for a society in which compromise and peace are leading components. He dies as an enemy of Cromwell and his revolution, which will soon after break out.

"No man is an island, entire of itself -
therefore never send to know for whom the bell tolls;
IT TOLLS FOR THEE."

"John Donne" is not only an opera about the life of a genius - it asks questions about the results of (all varieties of) political repression, and about the moral limits of adaptability; but also about the power of compromise and self-sacrifice. In his love poems, Donne took women out of the heavenly spheres and back down to Earth - a debatable kind of equality. Much of the contradictory life of John Donne can inspire and provoke, especially inasmuch as he found an intelligent and personal way to play an important role in a radically changing society.

The plot of the opera has, of course, elements of fiction; but historical and biographical contexts are carefully observed. The traditional operatic points of tension and relief (love, eroticism, war, struggle, tragedy, humor) have been generously placed; but John Donne is no hero - his virtue is having been human enough to have sought the path between the extremes. 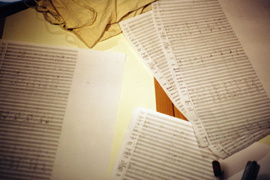 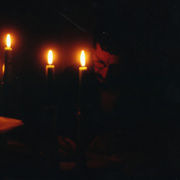 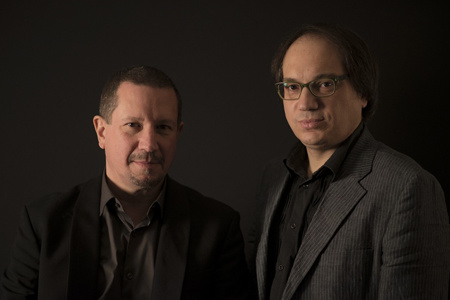